The objective of a Seed Tree treatment is to regenerate a stand to intolerant or intermediate shade tolerant species by leaving wind-firm, well-formed, mature seed trees (specifically white pine in Western Nova Scotia) uniformly distributed throughout.

The objective of a Seed Tree treatment is to regenerate a stand to intolerant or intermediate shade tolerant species by leaving wind-firm, well-formed, mature seed trees (specifically white pine in Western Nova Scotia) uniformly distributed throughout. 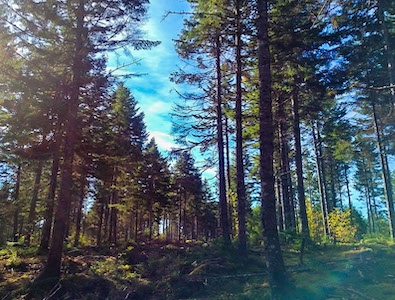 The objective of a Uniform Shelterwood is to uniformly thin the overstory to produce light conditions suited for natural regeneration of long-lived species. During the harvest treatment 30-40% of the basal area of the stand is removed. Intolerant and short-lived tree species such as balsam fir, as well as poor form or imminent mortality, are targeted for harvest. Stands are revisited over multiple entries typically every 10-12 years based on presence of acceptable regeneration.

The objective of a Strip Shelterwood is to generate light conditions suited for medium and shade tolerant trees. In a Strip Shelterwood one third of the area is treated with varying strip widths. Harvested strip widths are to be 1-1.5 times the average tree height. Usually used in areas of high windthrow hazards. Typically, these stands are harvested over 3 entries with the adjacent strip harvested when the regeneration is established.  This results in a 3-4 age class stand.

The objective of a Patch Shelterwood is to remove trees in small patches where they are dominated by intolerant short-lived species, such as balsam fir, to a later-successional stage dominated by more shade tolerant later successional species (red spruce). The patches are typically between .1-.3 of an ace. in size. Volume removed does not exceed 50%.

The objective of the Variable Retention treatments is to maintain vertical structure through retention of rare or long lived species, cavity or wildlife trees, young or immature trees that aren’t commercially viable. This treatment is usually prescribed in stands that are dominated by intolerant non windfirm tree species but have a portion of the stand that are late successional windfirm species. Variable Retention harvests are of 3 different classifications 10%, 20% or 30% retention.

The objective of an Individual Tree Selection treatment is to create an evenly distributed multi-aged stand through encouraging the regeneration of shade tolerant species. The treatment also improves the growth and quality of the remaining trees by selecting poor form early successional species from the stand during harvest. This treatment is usually prescribed in stands that have a significant amount of tolerant hardwoods and softwoods. Typically 65-70% of the starting stand basal area is retained post harvest.

The objective of a Group Selection is to create/maintain multiple age classes of forest with the stand patches of intolerant short lived trees are harvested in 0.1-1 hectare in size not exceeding 30% of the stand area. These patches will regenerate in long lived shade tolerant species with re-entry of the stand every 15-20 years.

The objective of a Commercial Thinning treatment is to improve the growth, quality, and species composition of the forest stand by harvesting 30-40% of the merchantable BA in 1 or 2 entries. Commercial Thinning is typically prescribed in stands at a younger age 30-50 years than other that have already had a silviculture treatment performed such as pre-commercial thinning or planting. 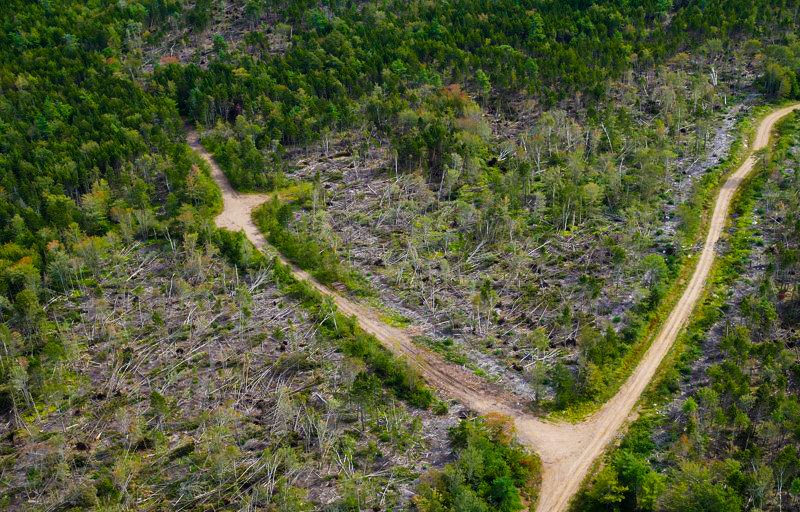 Nova Scotia has seen a rise in severe wind events usually resulting from Hurricanes such as Juan and Dorian. During these events areas of partially harvested stands and untreated stands blow down with varying severity. After significant wind events, the forest is surveyed aerially for areas that have suffered significant blowdown and are assessed for potential for salvage harvesting. In stands where windthrow exceeds 40% we harvest the blown trees while retaining still intact long lived windfirm trees such as white pine and yellow birch either individually or in clumps. 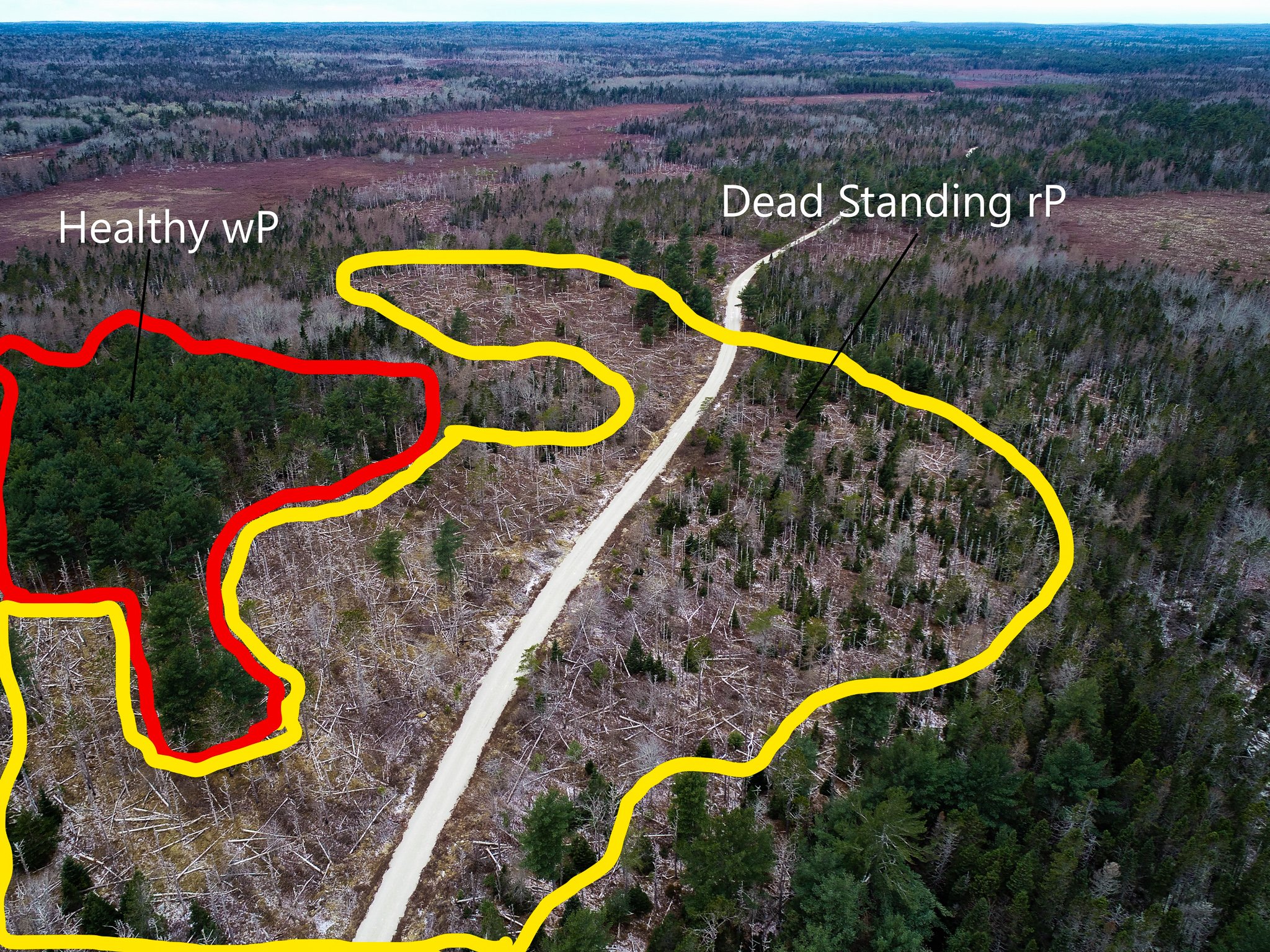 Salvage harvest of red pine plantations impacted by Sirococcus shoot blight times can be economically viable in our region. Sites chosen for Red Pine Salvage harvest are mature red pine plantations that are currently impacted by Sirococcus shoot blight. Sirococcus is a natural red pine disease (fungus) within our forests, but it has made a significant negative impact on the health of red pine trees found in plantations. Red pine plantations were established throughout Nova Scotia in the 1970-80s following the spruce budworm. These sites range from 30-100 percent of infestation. This leaves over half of our working forest trees left standing and very little for natural regeneration or vegetation remaining on site.

What is sustainable forestry?

Sustainable forestry means that we do not harvest more than what is grown. It is also management that maintains the forest ecosystem, protects water quality, and maintains healthy, vibrant communities.

“Sustainable forestry balances the needs of the environment, wildlife, and forest communities.”

How much of Nova Scotia is publicly owned?

There is approximately 850,000 hectares of publicly owned land in Western Nova Scotia.

How much land is under WestFor’s Licensing Area?

We can operate on approximately 490,000 hectares of land.

How much land does WestFor operate on in a year?

We operate on approximately 4000 hectares a year.

No, we only operate on publicly owned land.

HAVE A QUESTION? WE HAVE AN ANSWER!

We will reply to all questions within 2 business days.